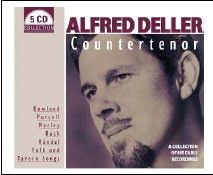 A Collection of His Early Recordings

Campion: Most sweet and pleasing are thy wayes

Campion: To Musicke bent is my retyred minde

Purcell: An Epithalamium (A Wedding Song)

Purcell: The History of King Richard the Second or The Sicilian Usurper: Retir'd from any mortal's sight, Z581

Purcell: Hark how all things in one sound agree (from The Fairy Queen, Z629)

Purcell: Thus to a ripe, consenting maid (from The Old Bachelor, Z607)

The English singer Alfred Deller is still thought of as the first truly great exponent of the art of the countertenor. Deller left behind a large number of excellent recordings, from folksongs, English baroque songs and partsongs up to and including the operatic repertoire. This 5-CD compilation presents music from the first ten years of his career, 1949 until 1959.

This box set includes music by Purcell, Dowland, Campion, and other significant 16th and 17th century English composers, as well as Shakespeare settings, drinking songs, sacred music by Bach and Buxtehude, and folk songs arranged by Ralph Vaughan Williams. Deller was also in great demand as a singer of the castrato roles in Handel operas, and so the collection also features excerpts from “Sosarme” in which Deller sings the title role.