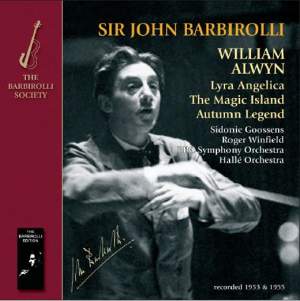 Even if you have one or more of these works in your collection this Barbirolli Society disc is well worth acquiring. It has genuine historic appeal since it lets us hear Alwyn’s earliest champion... — MusicWeb International, 14th January 2014 More…

One does not have to search for any great length of time through the extensive discography of Sir John Barbirolli to comprehend his life-long devotion to British music and, perhaps rather more so, to contemporary British composers. Of course, for a conductor who died in 1970, the use of the word ‘contemporary’ may seem somewhat out-dated with regard to the composers concerned: but they were, undoubtedly, Barbirolli’s contemporaries, embracing a wide spread of creative figures.

Barbirolli conducted the world premieres of two Vaughan Williams Symphonies – the Seventh, Antartica, and Eighth (the latter dedicated to him) – and made the first-ever recording of the Fifth, all with the Hallé Orchestra in Manchester. Earlier in his career, during his period as Music Director of the Philharmonic-Symphony Orchestra of New York, he had conducted the world premieres of two major scores by Benjamin Britten – the Violin Concerto, with Antonio Brosa as soloist, and the Sinfonia da Requiem – and Barbirolli’s later first recordings of major scores by Bax (Third Symphony) Edmund Rubbra (his Fifth Symphony) and John Ireland (Mai-Dun, and These Things Shall Be) amply demonstrate his commitment to British music of his time, those commercial recordings for HMV and Pye constituting one aspect of the great conductor’s support for British music.

What they do not reveal is Barbirolli’s live concert-giving and broadcasts of other works, and his long-serving additional commitment to the annual Cheltenham Festival, where he and the Hallé premiered many British orchestral works during the 1950s and 60s – including Symphonies by Arthur Butterworth (Hallé member as trumpeter for many years), John McCabe and – more relevant to the present issue – William Alwyn. It was not Alwyn’s symphonic music that first brought composer and conductor together: it was a film, A City Speaks, made in 1947 and directed by Paul Rotha, chronicling the rebirth of Manchester after the blitz air-raids of 1940, and the bombardment of the old Free Trade Hall. For such a film, on such a subject, Barbirolli and the Hallé were the obvious – indeed, the only – choice to play the film’s specially commissioned music, which had been written by Alwyn.

On learning of Alwyn’s then-new First Symphony, Barbirolli promised to give the premiere at the Cheltenham Festival. He was as good as his word – the premiere took place in 1950, followed by the London premiere and a commission for a Second Symphony, which followed in 1953.

And so it was that Barbirolli became one of William Alwyn’s most staunch supporters; several of the results of his later association with the composer can be heard on this CD. Before the Second Symphony was completely ready, Barbirolli and the Hallé had premiered Alwyn’s Symphonic Prelude The Magic Island in Manchester, following it with the broadcast premiere, which we hear on this CD.

Even if you have one or more of these works in your collection this Barbirolli Society disc is well worth acquiring. It has genuine historic appeal since it lets us hear Alwyn’s earliest champion in action and, in addition, all the performances are sensitive. The Barbirolli Society have put collectors in their debt by issuing this disc.