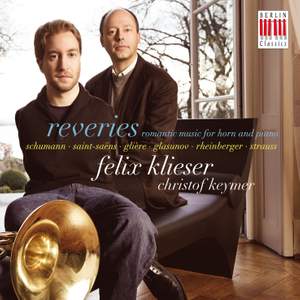 A passion for the horn The young hornist Felix Klieser is exceptionally talented. He is one of the best hornists in the world, with perfect mastery of his instrument at the age of twenty‐two, despite his handicap. Felix Klieser was born without arms and plays the horn with his feet. How does that work? "No problem" says the young artist, showing the stand that holds his horn at the appropriate height. He sits behind it, and uses the toes of his left foot to operate the valves ‐ which other hornists do with the fingers of their left hand.

He began having horn tuition when he was five, after convincing his parents of his firm intention to learn the instrument. Felix Klieser proved to be highly talented ‐ becoming a junior student at the College of Music and Drama in Hanover at seventeen, winning a prize in the national finals of the Jugend musiziert competition and receiving the Life Award in the "Art and Culture" category. Klieser has performed under Sir Simon Rattle at the Berlin Philharmonie and taken part in the world tour of Sting. In 2011 he began regular music studies in Hanover. There he met the pianist Christoph Keymer, who has accompanied him on the piano ever since.

The likeable artist is now presenting his debut album entitled "Reveries" in collaboration with Bavarian Radio. He has personally selected the repertoire of Romantic works for horn and piano. "The Romantic era has fascinated me from the start", says Klieser. No other age exploited the tonal variety of the instrument to such advantage. Schumann referred to it as the "soul of the orchestra", recognizing the musical potential of the then new valve horn and writing one of the best known compositions for horn and piano. Schumann's homage to the horn gave Felix Klieser incentive and inspired him.

In addition to Schumann's Adagio and Allegro, for his debut album he has chosen various works by composers from France, Russia and Germany. The selection is diverse, the tone pictures attractive. "They are from different cultures, but all from the same era", the young hornist says, "It was a time of radical change accompanied by a sense of anticipation, and that can be felt in the music." No wonder that Felix Klieser is enthusiastic about that age ‐ he is himself entering a new period in his life.