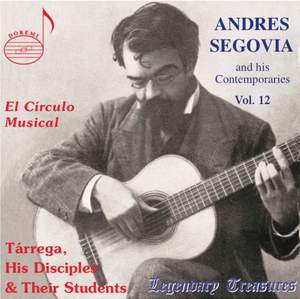 Segovia and his Contemporaries Vol. 12

Tarrega, His Disciples & Their Students

Tárrega: Prelude No. 1 in E major

Tárrega: Prelude No. 2 in A major

Tárrega: Prelude No. 5 in A Minor

This is one of the most important releases of historical recordings of the classical guitar ever produced. Francisco Tarrega was the father of the modern guitar, his influence unmeasurable. Besides the early cylinder extract of the Master playing his own music, this CD includes recordings of all his distinguished disciples - Llobet, Fortea, Pujol, Roblendo, Calatayud - most tracks never reissued since their first release in the 1920s and 1930s. In addition it offers rare performances of some of their students - Segovia, Rodes, and Sainz de la Maza. Also, this CD highlights what may be the first solo guitar recording ever made, as early as 1897, of Simon Ramirez of the famous Romance d'Amour.