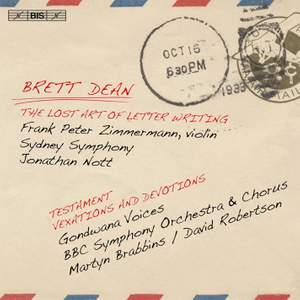 Dean creates a Berg-like soundscape in which fragments of that Symphony [Brahms 4] fleetingly or sometimes not so fleetingly swim into focus...A similarly effective tension between classic fragments... — BBC Music Magazine, February 2014, 5 out of 5 stars More…

Dean, B: The Lost Art of Letter Writing

Dean, B: Vexations and Devotions

III. The Path to Your Door

More than most composers currently active, Brett Dean uses music to tackle political and social themes of our times. A common factor in the works on this recording is the sometimes problematic aspects of human communication and the erosion and misuse of language. In his violin concerto The Lost Art of Letter Writing, which was awarded the renowned Grawemeyer Award in 2009, Dean strikes a blow for written correspondence, demonstrating how, even today, the art of letter writing, the conveyance of wholly individual mood pictures, is possible. Each of the four movements is prefaced by a quotation from an historical letter, from Brahms to Clara Schumann, from van Gogh to a painter colleague, from Hugo Wolf to his brother-in-law and, finally, from Dean’s compatriot, the outlaw Ned Kelly addressing the Australian government. With a duration of more than 30 minutes the work is a tour-de-force written for Frank Peter Zimmermann, who also performs it here with the eminent support of Sydney Symphony conducted by Jonathan Nott. In the work that follows it, Brett Dean – also a distinguished viola player – makes a guest appearance as part of the viola section of the BBC Symphony Orchestra. Testament is also is also inspired by the written word: Beethoven’s famous Heiligenstadt Testament, which he wrote while still in shock following the diagnosis of incurable hearing loss. In the piece, Dean traces the fluctuating emotions in Beethoven’s text, and succeeds in musically interpreting it as a turning point, a move from the deepest despair into one of Beethoven’s most important creative periods. With an exceptional playing time of 86 minutes (!), the disc closes with another large-scale work: Vexations and Devotions. Described by the composer as a ‘sociological cantata’, the three-movement work deals with the dehumanization of society, closely bound up with the loss of language and an increasing sense of alienation. The present recording was made during a public performance of the piece in the framework of the BBC Proms in 2007, with David Robertson conducting the BBC Symphony Orchestra and Chorus and the Australian children’s choir Gondwana Voices.

Dean creates a Berg-like soundscape in which fragments of that Symphony [Brahms 4] fleetingly or sometimes not so fleetingly swim into focus...A similarly effective tension between classic fragments and Dean's music features in Testament...weaves wailing and whistling lines from a 12-viola ensemble.

Dean evokes that art [of letter-writing] through mostly wistful musical languages which he feels appropriate to each...Zimmermann has the measure of the solo part and receives fine support from the Sydney Symphony Orchestra...Superb sound from BIS completes a fascinating disc.

This is a very fine and generous addition to Brett Dean's expanding discography.

Like the best works with literary subtexts, The Lost Art of Letter Writing can also be appreciated on its own purely abstract musical terms, and as a wonderfully idiomatic concerto inhabiting a post-Bergian musical world, it's as important an achievement as Dean's earlier Viola Concerto and one of the most significant recent additions to the violin-concerto repertoire.