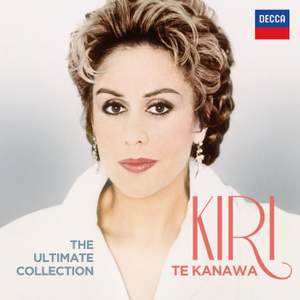 "I know that my Redeemer liveth"

Rodgers, R: Climb Every Mountain (from The Sound of Music)

I Could Have Danced All Night

This ultimate collection showcases an artist with such diversity and a voice like no other. As she approaches her 70th Birthday, she clearly shows no signs of slowing down. Indeed, she will be appearing on the 3rd Series of TV series Downton Abbey, starring as Dame Nellie Melba.

This compilation is a celebration of an artist who has had an astonishing career that has captivated audiences the world over, from the opera stage to fame on the small screen. She regularly performed with leading orchestras and conductors such as Sir Georg Solti and Sir Colin Davis.

In 1981 her fame turned to mega-stardom when she sang Handel's "Let the bright Seraphim" (track 1) at the televised wedding of Prince Charles and Lady Diana Spencer, reaching an audience of 600 million people.

This compilation highlights her flourishing recording career from arias such as Mozart's "Porgi, amor" and the "Jewel Song" from Gounod's Faust to hits from Broadway such as Carousel and The Sound of Music.