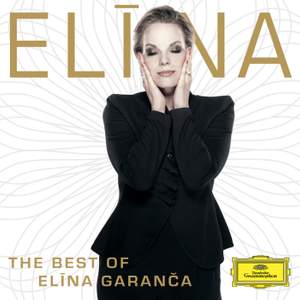 Elina: The Best of Elina Garanča

Villa-Lobos: Bachianas brasileiras No. 5 for Soprano and Cellos

Elīna Garanča’s personal choice of her greatest tracks, released to coincide with her receiving an Echo Award (6 October) & the publication of her memoirs in December

Ten years ago she made her sensational début at the Salzburg Festival, singing the role of Annio in Mozart’s Clemenza di Tito. Since then Elīna Garanča has become one of the greatest, most sought-after mezzo-sopranos in the world. As an exclusive Deutsche Grammophon artist, she has made four solo albums for the label, and collaborated on many CD and DVD releases.

Now, with the artist’s help, we have brought together favourite tracks from her discography – the Seguidilla and Habanera from Carmen, the Flower Duet from Lakmé (with Anna Netrebko), the Barcarolle from The Tales of Hoffmann and many more, including Annio’s aria from Clemenza di Tito, some of her great bel canto roles and the touching Lullaby (Nana) by de Falla (see tracklist).

The CD booklet includes a newly-commissioned interview with Elina, where she reflects on her career and indicates where she is headed artistically. Her complete discography is also given there.