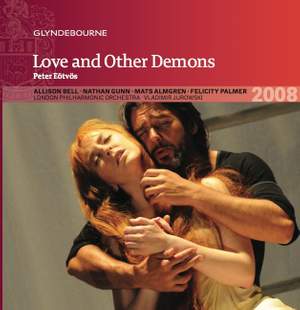 Eötvös: Love and Other Demons

Eötvös's fifth full-length opera is surprisingly lacking in heat. But the music is brilliantly luminous...a glittering score that is clear and precise, wonderfully moulded by Vladimir Jurowski... — BBC Music Magazine, Christmas Issue 2013, 4 out of 5 stars More…

Eötvös: Love and Other Demons

This, Peter Eötvös’ fifth opera, is based on the novel Of Love and Other Demons by Columbian author Gabriel García Márquez. The story is set in an 18th century Columbian seaport. It is based around a young girl (Sierva Maria/Allison Bell) who contracts rabies and is believed to be possessed. She is admitted to a Convent for observation. Father Cayetano Delaura (Nathan Gunn) tends to her and is supposed to exorcise her, but shockingly falls in love instead. The opera is of their love: improbable, moving, and defying the constraints of faith and reason. The opera is sung in four languages; English being the language of the people, Latin the language in the Convent, Spanish deployed for intimate discussion between the central characters Sierva and Delaura, and Yoruba the language of the slaves.

Jurowski’s conducting reveals fine detail and finesse within the score, Allison Bell’s stratospheric ‘bel canto’ is fearless, Nathan Gunn convincing in his portrayal of the tortured soul of Delaura. Love and Other Demons was commissioned by Glyndebourne. In its premiere season it was performed at the BBC Proms at London’s Royal Albert Hall, and has subsequently been staged by Lithuanian National Opera in November 2008 and a sold out production in Chemnitz in Germany in 2009.

Eötvös's fifth full-length opera is surprisingly lacking in heat. But the music is brilliantly luminous...a glittering score that is clear and precise, wonderfully moulded by Vladimir Jurowski and incandescently played by the LPO...Bell invests the stratosphere-defying coloratura with heart-stopping defiance and pathos

Eötvös creates some spine-chilling hard-edged moments but the music is predominantly slow-moving and soft-centred, the overall effect closer to melodrama than to tragedy...of high technical quality, with fine all-round performances. Apart from the fearless and affecting Bell, Felicity Palmer is a formidable [Abbess].