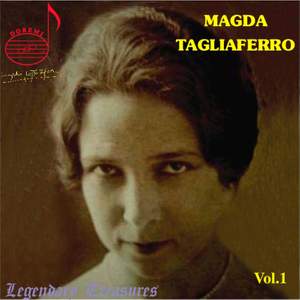 Born in Rio de Janeiro, on January 19, 1893, to French parents, Magda Tagliaferro began to play the piano when she was three years old. Her father, a fine pianist himself was her first teacher. She made her debut in 1902 in São Paulo performing Mozart's Piano Concerto No. 20. At age of 13, her father took her to Paris. After initial studies with Antonin Marmotel in the Paris conservatory, she was awarded the Premier Prix in the Paris Conservatory in 1907 and Alfred Cortot accepted her to his class. Tagliaferro became involved in the musical life of Paris associating with such composers as Faure, D'Indy, Hahn, Ravel, Poulenc, Milhaud, and Ibert. She played duets with Faure and gave many first performances of the new works of these important composers. Her concert engagements in the 20's and 30's took her to more than 30 countries in Europe, Africa, South America, and Asia. She frequently appeared with Barbirolli, Weingartner, Dobroven, Monteux, Furtwangler, Paray and Munch, and in joint recitals with Cortot, Thibaud, Enescu, and Casals. In 1937 she joined the Paris Conservatory where she taught until 1939. Among her pupils was the young Pnina Salzman. During WW2 Tagliaferro was unable to stay in France and returned to Brazil where she founded her own piano school. In 1949, Tagliaferro resumed her performing career in Europe. She was also a jury-member of the Long-Thibaud competition She continued performing until 1985, when she returned to her native land. She died in Rio de Janeiro on September 9, 1986. On this special DOREMI set of 2CDs + 1DVD, most audio items are first time on CD and all video items are first time on DVD.