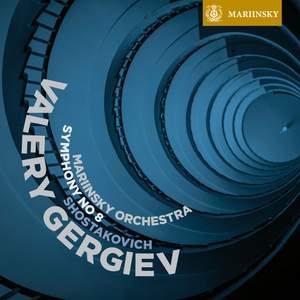 a very impressive interpretation of the most harrowing and questioning of Shostakovich's 'war symphonies'...Gergiev is especially convincing in his shaping of the large-scale architecture of... — BBC Music Magazine, January 2014, 4 out of 5 stars More…

Valery Gergiev continues his Shostakovich symphony cycle with the release of the Eighth Symphony. The work, imbued with a deep sense of sorrow and fear, is considered to be one of the composer’s finest scores. The authorities expected a victorious anthem in light of the Nazi retreat, but Shostakovich appeared too affected by the casualties and ruin of the war.

The New York Times recently hailed Gergiev for demonstrating a "powerfully intuitive connection to these works and a keen ear for the intricacies of Shostakovich’s musical voice." Previous releases in Gergiev’s Shostakovich cycle include Symphonies 1 & 15, Symphonies 2 & 11, Symphonies 3 & 10 and Symphony No. 7. Between them they have received two Grammy Award nominations, as well as Chocs from Classica (France) and Editor’s Choices from Gramophone. Valery Gergiev and the Mariinsky Orchestra will tour the US in October with an all-Russian programme including performances of Shostakovich Symphonies 5 & 8 and Stravinsky’s Firebird.

a very impressive interpretation of the most harrowing and questioning of Shostakovich's 'war symphonies'...Gergiev is especially convincing in his shaping of the large-scale architecture of the huge first movement and the fourth movement's passacaglia.

The interpretation still lacks the nth degree of intensity...On the plus side, the argument is given a little more space, Gergiev's theatrical instincts ensuring that the colours are not uniformly grey. String lines are shaped with surprising affection. The climax when it comes is as timbrally Russian as can be found today.