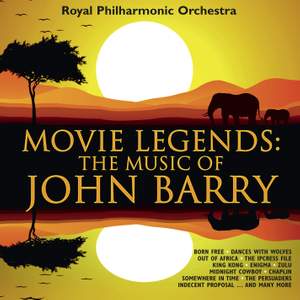 The Specialist: Suite - Main Title - Did You Call Me? (arr. N. Raine for orchestra)

The Knack … and How to Get It: Main Theme (arr. N. Raine for orchestra)

Barry, J: Out of Africa (arr. N. Raine for orchestra)

Out of Africa: Main Theme (arr. N. Raine for orchestra)

Launched to coincide with the Royal Philharmonic Orchestra’s The Very Best Of John Barry concert at London’s Royal Albert Hall, this brand new disc Movie Legends: The Music Of John Barry celebrates the wonderful motion-picture themes written by Britain’s leading film score composer, in what would have been his 80th birthday year.

The CD focuses on the many, varied soundtracks which John Barry wrote outside of the James Bond series, and features 18 main themes and musical excerpts from key moments in the composer’s 50 year career, spanning from Zulu (1964) to his final film score Enigma (2001), as well as the theme for the iconic 1970s television series The Persuaders.