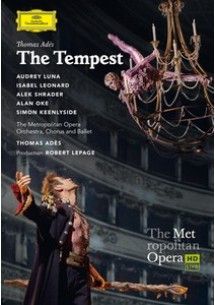 Based on Shakespeare’s great play, the new opera by English composer Thomas Adès has been acclaimed as a modern masterpiece and is now released on DVD for the first time ever.

“The Tempest” tells the story of the magician Prospero and his daughter Miranda, shipwrecked on an enchanted island where human dramas intertwine with supernatural happenings.

An exceptional new release ahead of the Shakespeare anniversary year (450th birthday on 26th April 2014) .

Visually spectacular and endlessly inventive, the production by visionary director Robert Lepage places the drama in a glittering recreation of Milan’s La Scala opera house. “The Tempest” features a superb cast, headed by the charismatic baritone Simon Keenlyside as Prospero – the role he created at the opera’s premiere at the Royal Opera House, Covent Garden. Miranda is sung by Met rising-star Isabel Leonard and Audrey Luna gives a truly staggering display of vocal virtuosity as the spirit Ariel. The performance, captured live at The Met, is conducted by the composer Thomas Adès.

The Met's preview of the opera