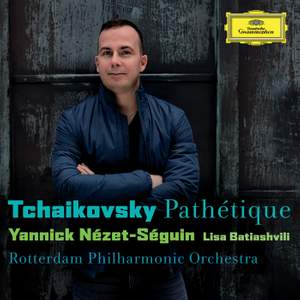 I have to hand it to Yannick Nezet-Seguin: this is without question one of the finest Pathetiques to have come my way in the last 30 or so years. Proof of credentials appears fairly early on. — Gramophone Magazine, December 2013 More…

The dynamic young French-Canadian conductor records the symphony that has played a central role in his remarkable career.

Yannick Nézet-Séguin first heard it live in Montreal at the age of eight. It was the work he chose for his debut with both the Orchestre Métropolitain du Grand Montréal and the Philadelphia Orchestra.

Conducting this quintessentially Russian music with the Rotterdam Philharmonic acknowledges his predecessor on the podium, Valery Gergiev, as well as showcasing the depth and refinement of the Dutch orchestra’s rich textures.

Yannick Nézet-Séguin admires Tchaikovsky not just as a composer of heart-breaking melodies but also as a master symphonist. “The point for me is this work’s pervasive lust for life, and the lack of faith in humanity which is the implicit message of the end.”

The symphony is accompanied by two sets of Tchaikovsky’s songs, in arrangements for piano and violin. Yannick Nézet-Séguin at the piano is joined by star violinist Lisa Batiashvili, whose understanding of the original Russian texts colours her interpretation.

At just 37, Yannick Nézet-Séguin is a driving force on the international music scene. He has conducted operas at The Metropolitan, Covent Garden and the Salzburg Festival and concerts with many of the world’s leading orchestras. Music Director of the Rotterdam Philharmonic and the Philadelphia Orchestra, he signed a long-term recording contract with Deutsche Grammophon in June 2012.

I have to hand it to Yannick Nezet-Seguin: this is without question one of the finest Pathetiques to have come my way in the last 30 or so years. Proof of credentials appears fairly early on.