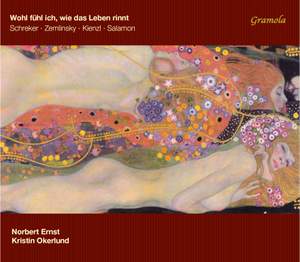 ‘I feel how life is trickling away’ – On a quest between unrequited love, passion and apocalypse, here you can hear sometimes despairing, pausing, but also conciliatory and optimistic songs from musical life in Vienna at the turn of the 19th and 20th centu- ries. The tenor Norbert Ernst and Kristin Okerlund presented selected songs by the Austrian composers Franz Schreker, Alexander Zemlinsky and Wilhelm Kienzl. The Wang Valley Songs by the Wiener Neustadt composer Michael Salamon, dedicated to the interpreter Ernst in 2010, were written after seven poems from the cycle The Wang Valley by the greatest Chinese poet of the Tang Dynasty, Wang Wei (around 701–761).