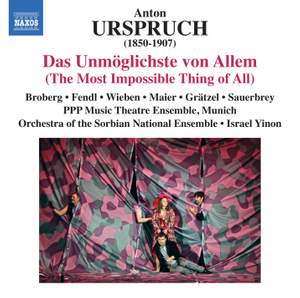 Offer, Urspruch: Das Unmöglichste von Allem (The Most Impossible Thing of All)

Anton Urspruch was Franz Liszt’s favourite pupil and saw himself as a ‘progressive modernist’. His music, whilst influenced by his teacher, and by Wagner, diverged from the paths taken by contemporaries such as Reger and Richard Strauss.

His masterpiece, the comic opera Das Unmöglichste von Allem, is constructed on a symphonic scale with a series of amusing plot lines powered by tuneful and inventive writing. Although the opera was well received early on by both critics and musicians, after Urspruch’s death it fell into oblivion until triumphantly revived by the forces on this live recording, the first performance of the original, uncut version of the opera.

Very little of Urspruch’s music is available on disc, except his piano music and some of his songs.