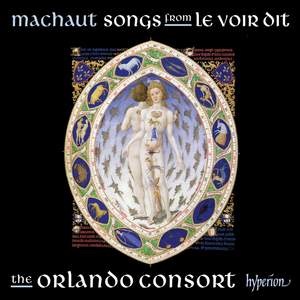 [Venner and Dobell] display the most magnificent articulation of the texts alongside the understanding of the lines gained from their senior colleagues...Those who know the Orlando Consort will... — Gramophone Magazine, November 2013 More…

The Orlando Consort performs the music of Machaut, the most significant French poet and composer of the fourteenth century. Sometimes described as ‘the last of the trouvères’ because of his dual talents as poet and musician, Machaut built on past traditions yet spearheaded a new school of lyric composition. In the field of literature, he developed several of the poetic forms and genres that dominated for generations to come. His impact on the musical life of his age was equally profound; he is closely associated with the new style of polyphonic love-song that became so popular in the fourteenth century, and today is considered the supreme representative of the Ars nova musical tradition that revolutionized composition and notation in that period.

Livre dou Voir Dit (‘Book of the True Tale’) is Machaut’s masterpiece. By its very title, the tale purports to be autobiographical: it relates a supposedly recent episode in the ageing poet-composer’s life, his love affair with a lady some forty years his junior.

[Venner and Dobell] display the most magnificent articulation of the texts alongside the understanding of the lines gained from their senior colleagues...Those who know the Orlando Consort will know what to expect. No instruments, just solo men's voices...always dead in tune, always beautifully balanced.

The performances by the Orlando Consort of four male voices are masterly.