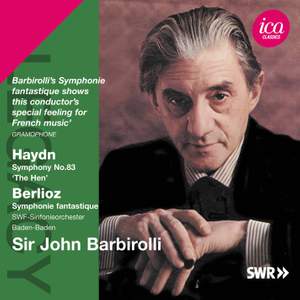 Barbirolli's Haydn from 1969 is very much of its time, and not without some fine qualities. One can sense the affection in which the conductor held this work...The Symphonie fantastique finds... — BBC Music Magazine, December 2013, 3 out of 5 stars More…

Sir John Barbirolli (1899–1970), born in London of Italian and French parentage, is remembered above all as conductor of the Hallé Orchestra in Manchester, which he helped save from dissolution in 1943 and conducted for the rest of his life. Earlier in his career he was Arturo Toscanini’s successor as music director of the New York Philharmonic, serving from 1936 to 1943. He was also chief conductor of the Houston Symphony from 1961 to 1967, and was a guest conductor of many other orchestras, including the BBC Symphony Orchestra, London Symphony Orchestra, the Philharmonia, the Berlin Philharmonic and the Vienna Philharmonic, with all of which he made recordings.

Both in the concert hall and on record, Barbirolli was associated with the music of English composers such as Elgar, Delius and Vaughan Williams, but his interpretations of Mahler and Sibelius, as well as those of Berlioz, Debussy and Ravel, have always been very much admired.

Barbirolli made two earlier recordings of Berlioz’s Symphonie fantastique in 1947 (mono) and 1958 (early stereo), both with the Hallé Orchestra. This new live recording with the SWF orchestra in Baden-Baden from 1969 is in state-of-the-art stereo sound and does full justice to Berlioz’s wonderful score. Likewise, Haydn's Symphony No.83 ‘The Hen’ always remained a Barbirolli favourite. He first recorded it in 1949 in mono but here it is captured in excellent stereo twenty years later.

This live studio concert comes from February 1969 when, after making his long-delayed debut with the Concertgebouw Orchestra in Amsterdam, Barbirolli arrived in Germany to spend a month giving concerts in Stuttgart, Baden-Baden, Cologne and Hamburg.

Barbirolli's critically acclaimed recording with the KRSO in Cologne of Schubert, Britten and Sibelius has recently been issued on ICA Classics as ICAC5096.

This CD offers wonderful value with over 80 minutes of music.

Barbirolli's Haydn from 1969 is very much of its time, and not without some fine qualities. One can sense the affection in which the conductor held this work...The Symphonie fantastique finds Barbirolli much more at home. Drama and dreaminess are here in abundance, allowing us to savour this work's extraordinary extremes.