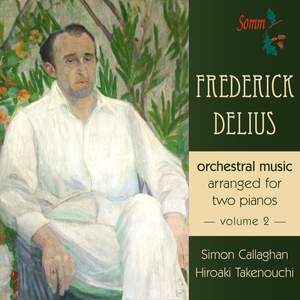 Delius: Paris: The Song of a Great City (arr. J. Buths for 2 pianos)

Delius: The Song of the High Hills (arr. P. Grainger for 2 pianos)

Last year marked the 150th Anniversary of the birth of Frederick Delius and SOMM joined his many admirers in paying tribute to a composer who has a very special place in the history of twentieth-century music. Our first volume of Delius’s orchestral music transcribed for two pianos provided us with a fresh and enjoyable slant on Delius's orchestral music which we most of us know and love.

We in England have been jealously possessive of the fact that Delius was born in this country, which would automatically label him as a “British” composer. In fact Delius had no home and was by nature rootless and a wanderer. He was born in Bradford, Yorkshire of naturalised German immigrants, and aged 22 he lived and worked for a short while in Jacksonville Florida where he fell in love with negro spirituals and the sound of negro voices singing in chorus, his first powerful source of inspiration.

Delius was a complete rebel who flouted convention. Although he himself had studied composition at the Leipsig Conservatory, he held academic respectability in utter contempt and adapted the technique of composition to his own ends, relying on instinct and technical knowledge. It no doubt amused him to be described by those who had only a superficial experience of his scores as an amateur or a dilettante but his special brand of genius was recognised by his friends and kindred spirits, Percy Grainger, Philip Heseltine, Julius Buths and Eric Fenby, among others. It was they who expertly arranged some of Delius’s orchestral music for two pianos or piano duet.

Volume I, (SOMM0112) released last year, marked the beginning of an exciting collaboration between SOMM and the duo team of Simon Callaghan and Hiroaki Takenouchi, who have given us these remarkable premiere recordings. Their deeply felt performances do not only transcend the limitations of the instruments, they also allow many more of the inner strands of the orchestral textures to be heard with greater clarity.

The sheer ecstasy of [the Song of the High Hills] climax is well communicated...Philip Heseltine’s transcription of Summer Night on the River retains that lovely languid Delian sensuality.

This second disc by these players of Delius transcriptions affords a five-item sequence, by turns dancelike and wistful, sometimes both at the same time, and necessarily a touch monochrome.