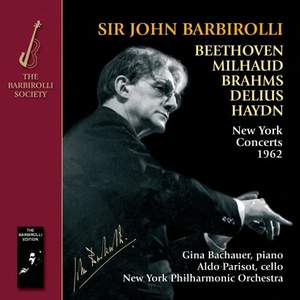 The news of the 36-year-old British conductor John Barbirolli’s appointment as successor to Arturo Toscanini as music director of the Philharmonic-Symphony Society of New York was greeted with a mixture of astonishment, disbelief and anger in some quarters. Barbirolli himself knew the enormity of the task he had agreed to and what he had taken on, but it is a measure of his innate qualities that, although there would always be resentment at his appointment, he soon won over the respect and affection of the musicians and the plaudits of many in the press.

The international recording giant RCA Victor quickly engaged the young Englishman and the New York orchestra to make recordings for them – which soon won over a circumspect press and public to the extent that Barbirolli stayed in this post until 1943, his contract renewed.

Barbirolli left the New York Philharmonic in 1943 because of two major outside factors, both brought on by the War, by when, since December 1941, the United States had become a major combatant. The first was that the powerful Musicians’ Union had compelled all professional musicians, including foreign-born conductors, to join it: the second was that every conductor holding a permanent position with a professional American orchestra had to become a United States citizen and take American nationality.

He left behind in New York a large body of musicians and colleagues, friends, members of the public and press, who were genuinely sorry to see him go. Although his relationship with the Hallé was the first which would spring to the public’s mind in later years, his New York associations were lasting: when in 1962 the magnificent Lincoln Center was opened in New York, containing the first major concert hall (alongside other major performing venues) to be built in the City since Carnegie Hall in 1891, the Philharmonic invited Barbirolli back to conduct during that inaugural 1962 season.