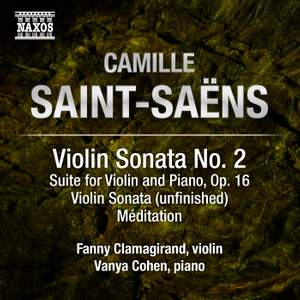 Saint-Saëns: Carnival of the Animals (version for violin and piano)

Carnival of the Animals: XIII. The Swan (version for violin and piano)

Saint-Saëns’s early unfinished Violin Sonata is testimony to his remarkable precocity as a child. His music’s universal appeal is demonstrated in adaptations of his Bach influenced Suite, Op. 16, the gracious Romance, Op. 48 and one of his most famous pieces Le cygne (The Swan). The Second Violin Sonata follows classical forms, while the Méditation is notable for an affecting melody that builds beautifully to an intimate conclusion.

Volume 1 can be heard on Naxos 8572750. Acclaim for Fanny Clamagirand’s playing includes her “brilliant advocacy” of Saint-Saëns’s three Violin Concertos. (Strings Magazine on 8572037) This release brings together versions of works by Saint-Saëns which are rarely heard in recordings. Volume 1 in this complete edition was released in April 2013 and has been warmly received by broadcasters and reviewers. German blog The Listener admires how “the virtuosity of the music is presented seemingly effortlessly by both performers.