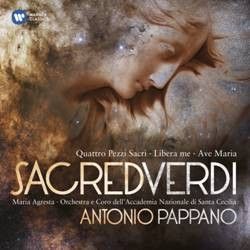 Agresta is able to display the warmth and tenderness of her soprano in music that suits it extremely well...Once again, Pappano's blend of deep understanding and infallible instinct helps him... — BBC Music Magazine, October 2013, 5 out of 5 stars More…

'Antonio Pappano... seems to have an almost mystical feel that always brings out the best in Verdi's music.' Daily Express

Antonio Pappano and his Orchestra e Coro dell’Accademia Nazionale di Santa Cecilia celebrate the 200th anniversary of the birth of the great Italian composer Giuseppe Verdi with this programme of sacred choral music. The repertoire consists of the Four Sacred Pieces and, with soprano Maria Agresta as the soloist, the 1880 Ave Maria and the original version of Libera me from the Messa da Requiem. Pappano and his forces will perform this programme on 20 July at the Royal Albert Hall for the 2013 BBC Proms.

As Music Director of the Royal Opera House, Covent Garden since 2002, and the Orchestra dell’Accademia Nazionale di Santa Cecilia since 2005, Pappano has led two outstanding orchestras and choruses - and a host of wonderful soloists - in both operatic and non-operatic repertoire. Their performances, in the concert hall and on disc, have won enthusiastic critical acclaim and resulted in numerous awards.

Pappano said recently, “2013 being 200th anniversary of Verdi’s birth, I think, with all the opera that I am conducting in the theatre, this disc is something especially important for me – to concentrate on his sacred music. This is music that is not really well known but shows in another light a composer that we think we know so well.”

Although published as a collection, the Four Sacred Pieces were never meant to be performed together. They were written at different times and for different reasons and, consequently, are very diverse. Verdi worked on one or another of the pieces intermittently for nearly ten years and was apparently not completely satisfied with them and tried to stop them from being published. Fortunately for us, his publisher, Ricordi, and his friend and librettist, Arrigo Boïto, went ahead and published them. Pappano describes them as displaying “an amazing development in Verdi’s mastery of harmony. … these are pieces that he wrote after Falstaff so they are his final testament, very, very important pieces.”

In Pappano’s words [about the Four Sacred Pieces], “The Ave Maria is a piece for a cappella chorus built on an enigmatic scale proposed by a journalist to challenge composers. And Verdi took it upon himself to meet this challenge to try to harmonise this enigmatic scale. What he does with it is quite magical, if austere, and very clever. I think it has a spirit of the history of Italian choral music that dates back to Palestrina. The Stabat Mater is a very grand piece for a large orchestra and chorus. The text – the suffering Madonna under the cross watching her son die - has been set by many Italian composers so Verdi is carrying on an important tradition. The Lauda is for female voices, so we get an amazing colour change, very subtle in its harmonic presentation and full of a youthful joy. The Te Deum starts with a cappella chorus and with, like a Gregorian chant, and then there is an explosion of Sanctus. Again, a huge orchestra, double chorus this time and full of contrapuntal writing, full of the highest extremes and challenges in the vocal writing that you can ever imagine but of course, it is always Verdi and there is an element of theatre there and an incredible power that is unleashed and is always somehow beneath the surface. You need a magnificent chorus for these works and I think I have just the thing here. This music is in their bones.”

“The rest of the album is made up of the Libera Me, a piece that Verdi wrote for a Mass written in memoriam to Rossini. Verdi and a host of other composers each had a movement to write. Now the Libera Me that we are doing is that original version. He would later include it in his Requiem in honour of Manzoni and, when he did that, he changed it quite a bit actually but there are similarities between the two pieces. To record the original version after we have already recorded the other version is very exciting for us, just because of those subtle, and yet noticeable changes: difference of key, difference of orchestration, difference of harmonies also. A wonderful soloist, Maria Agresta, will take part in the Libera Me and then will sing a piece that is not very well known. It is called the Ave Maria and it is similar in mood to the other Ave Maria in Verdi’s Otello, which Desdemona sings but, again, it is very sophisticated harmonically, just accompanied by strings, very muted in its expression and very personal. There is a real humanity in it and absolutely no pomposity whatsoever, very genuine, with magical harmonic changes and surprises everywhere.”

Maria Agresta has been described by The New York Times as a “full, iridescent soprano [who] dealt handily with the music’s demands for bel canto gracefulness as well as for Verdi-like fervor, offering some beautiful pianissimos along the way”

The Accademia Nazionale di Santa Cecilia is a rare example of an Italian symphony orchestra unattached to an opera house, and it is unanimously recognised as the country’s finest symphonic orchestra. Since taking over as Music Director, Antonio Pappano has revitalised and galvanised the Orchestra with his enthusiastic spirit, positive energy and consummate musicianship. It has been voted one of the leading orchestras of the world by several publications.

In the summer of 2013, Pappano and the Santa Cecilia Orchestra and Chorus perform two Proms at the Royal Albert Hall. One programme consists of works by Mozart, Schumann and Rachmaninov, the second is their Viva Verdi! Prom. In August Pappano makes his Salzburg Festival debut in a keenly anticipated production of Don Carlo with the Vienna Philharmonic and with a performance of Britten’s War Requiem with the Santa Cecilia Orchestra and Chorus and soloists Anna Netrebko, Ian Bostridge and Thomas Hampson. In 2013/2014, Pappano conducts productions of Parsifal, Les Vêpres siciliennes and Manon at the Royal Opera House and, with the Santa Cecilia Orchestra and chorus, Peter Grimes, Bach’s Mass in B Minor and orchestral concerts with soloists including Leonidas Kavakos, Radu Lupu, Yuja Wang, Sol Gabetta and Lang Lang.

Antonio Pappano has recorded exclusively for EMI Classics since 1995 and renewed his contract with the label in October 2010. His substantial discography ranges from award-winning complete operas to orchestral works to lieder (as pianist). Previous recordings of works by Verdi include the Messa da Requiem with the Santa Cecilia Orchestra, which won the Critics’ Choice Award (2010 Classical Brit Awards), the Choral award (2010 BBC Music Magazine Awards) and the Choral award (2010 Gramophone Awards) and DVDs of Don Carlo (“Antonio Pappano, conducting with loving ferocity and spacious tempi, draws the classiest orchestral playing and choral work from the ROH musicians” -The Guardian) and Simon Boccanegra (“Antonio Pappano's conducting brims over with warmth, detail and dynamism, and the orchestra is on fire for him” -The Guardian) from the Royal Opera House.

Antonio Pappano received a Knighthood in the UK in the 2012 New Year’s Honours List, and has since been awarded the Knighthood of the Cavaliere di Gran Croce Ordine al Merito della Repubblica Italiana by the President of the Italian Republic. He received the ISM (Incorporated Society of Musicians) Distinguished Musician Award for 2012 and was named Conductor of the Year at the inaugural International Opera Awards in April 2013.

Agresta is able to display the warmth and tenderness of her soprano in music that suits it extremely well...Once again, Pappano's blend of deep understanding and infallible instinct helps him arrive at a performance of unusual conviction.

Pappano's players provide a firmness of tone in a perfectly balanced sound stage...At full pelt [the chorus] is equally matched to the tutti of the orchestra...Pappano is such a compelling advocate for Verdi's music that there could be no finer 200th-birthday salute than this stunning disc. Do try to find room for it on your shelves.

the performances are very good and the enterprising programme should be self-recommending to Verdi enthusiasts, especially since, to the best of my knowledge, the Ave Maria and the Libera me are not otherwise available at present. When you factor in also an excellent account of the Four Sacred Pieces then this disc is a notable contribution to the Verdi bi-centenary celebrations.

Pappano's commitment and insight are never in doubt, but ultimately, it's the choral singing, wonderfully secure and deeply fervent, that commands attention. Maria Agresta is the heartfelt if occasionally tremulous soloist.