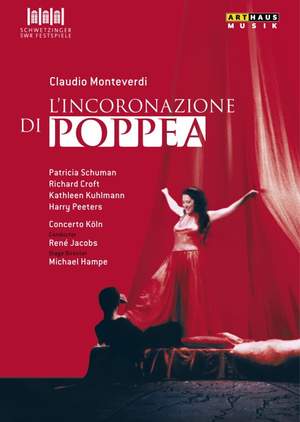 Power is the focus of Hampe's glamorous staging...Kuhlmann's Ottavia is thrilling but sexual chemistry is absent. — BBC Music Magazine, November 2013, 3 out of 5 stars More…

With this version of L’ incoronazione di Poppea the famous Baroque expert René Jacobs and stage director Michael Hampe produced one of the most recognized versions of Monteverdi’s last opera. Supported by the inventive original-sound ensemble Concerto Köln and the famous singers Patricia Schuman, Richard Croft, Kathleen Kuhlmann and Harry Peeters this interpretation shows the very modern aspects of a piece that was first performed in 1642.

In the history of opera Claudio Monteverdi’s work represents the first high point to fundamentally shape the genre: his opera Orfeo composed in 1607, is considered by many to be the first genuine opera ever written. In 1613 he was given the post with the highest honour in the musical world of that time: Kapellmeister at San Marco Cathedral in Venice. One year before his death he wrote L’ incoronazione di Poppea, which was performed several times during the seventeenth century.

Power is the focus of Hampe's glamorous staging...Kuhlmann's Ottavia is thrilling but sexual chemistry is absent.

The sound may be a bit rough, and by today’s standards the camerawork is far from fancy, but this is a meaty, dramatic and passionate performance...In a big-voiced production, Kathleen Kuhlmann’s brooding Ottavia is the pick...this is a fine antidote to the usual milksop Baroque treatment.