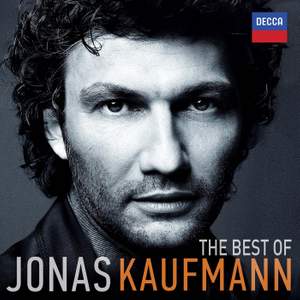 The Best of Jonas Kaufmann

the full range of his characterisation is well represented...perhaps the most impressive example of his ability to inhabit a role is in “Io l’ho perduta!”, where his beautiful fading “Ahime!”... — The Independent, 7th September 2013, 4 out of 5 stars More…

"I Revel In Hope"

Showcasing the unique variety and quality of Kaufmann’s award-winning recordings for Decca, this album contains some of the best-loved operatic repertoire and of roles performed by Kaufmann, conducted by masters such as Abbado, Pappano and Gardiner and recorded in resplendent Decca sound.

Central to the collection are the two great nineteenth-century operatic geniuses Verdi and Wagner, coinciding with their 200th anniversaries. Kaufmann is probably the only tenor able to sing both Italian and German opera with equal aplomb.

It also features extracts from some of the greatest works in the operatic canon including arias by Puccini, Bizet and Mozart, as well as two recordings of Mascagni and Richard Strauss which are NEW TO CD. He is joined by Renée Fleming for the duet from Puccini’s 'La Rondine'.

Accolades for Kaufmann’s Decca recordings have been plentiful, with recent awards including the inaugural International Opera Award for best male singer, three Gramophone Awards, a Goldene Deutschland Award, a Grammy, an ECHO Award, Artist of the Year from Musical America and the Bayerische Europamedaille.

"The colour, the elegance and the sheer beauty of tone in his singing are truly exceptional” The Guardian

the full range of his characterisation is well represented...perhaps the most impressive example of his ability to inhabit a role is in “Io l’ho perduta!”, where his beautiful fading “Ahime!” in the closing line conveys all the wretched despair of Don Carlo’s betrayal.