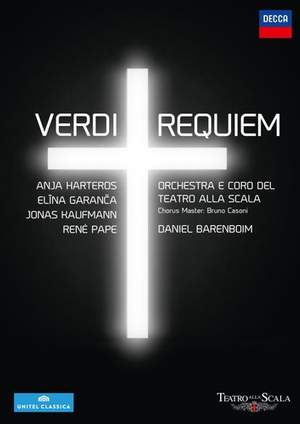 A Verdi Requiem with a dream line-up of soloists and the forces of La Scala, Milan, directed by one of the greatest maestros of our time.

Preceding acclaimed performances at the Lucerne and Salzburg Festivals, Barenboim and his magnificent partners recorded this masterpiece around a live performance at La Scala, Milan, in 2012. This marks the first audio recording by Barenboim in his role as La Scala’s Music Director.

Barenboim's interpretative view is grand in conception, with the La Scala performers offering him sufficient depth and richness of tone...the four soloists form a quartet finely balanced in vocal weight and proficiency...this is an impressive account.

this performance, exciting and occasionally thrilling though it is, is not remotely Italian...It's a 'through-composed' linked-up performance, paced withy a dramatic curve that makes even the punchiest Italian-led ones...feel like number opera...The non-Italian soloists are in good fearless voice and aurally well integrated into this concept

an optimum line-up of soloists for our time...Garanca’s lush mezzo sounds like an Amneris in waiting in the Lux aeterna; Pape is a rock in the bass soloist’s pronouncements...I wouldn’t want to be without Kaufmann’s searing Ingemisco and moving, introverted Hostias

It's a thoughtful, considered interpretation that places the emphasis not so much on the terrors of divine judgment as on mankind's suffering in the face of the unknown...the end result makes up in compassion for what it sometimes lacks in visceral excitement.

The magnificent full-throated chorus project in a manner liable to rip off the La Scala roof. And the soloists too trail opera glory...Barenboim, meanwhile, does everything to encourage bold attack from players and singers; even his pauses tremble. All told, it’s a thrilling account.