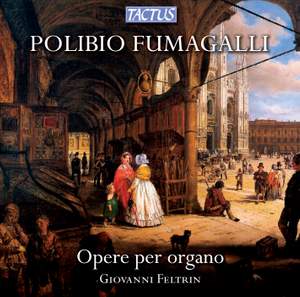 For some time now, the recording scene in and out of Italy has focused on the rediscovery of the most outstanding Italian organ works composed between the 19th and the 20th centuries, now performed with philological rigor on historical instruments. This renewed interest explains the choice to dedicate a monographic recording to Polibio Fumagalli (1830-1900), a prominent figure of the second half of the 19th century, and a link between the old and the new concept of organ construction and composition in Italy. An organ teacher at the Conservatory of Milan (among his students was Marco Enrico Bossi), Fumagalli composed numerous excellent organ works, and succeeded in moving from the Italian opera style to the neoclassical, symphonic tendencies of the German and French styles. In order to highlight this shift, organist Giovanni Feltrin offers a chronological promenade through Fumagalli’s entire production - from his early “Six original Marches” to the “Sonata in E minor” opus 290 (composed in 1892), utilizing two different organs: an 1858 Serassi and a 1932 Farinati.