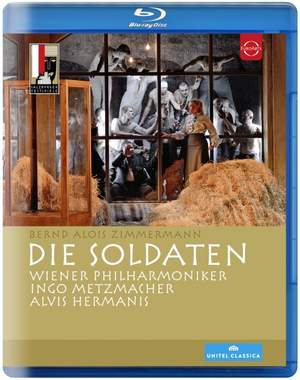 Zimmermann, B A: Die Soldaten

[Aikin] accomplishes the superhuman feat of actually *singing* Marie's music, a voice-killer if ever there was one...[she is] convincing as the petulant woman-child of Act 1, and the character's... — International Record Review, September 2013 More…

Zimmermann, B A: Die Soldaten

The “multimedia music theatre” Die Soldaten by Bernd Alois Zimmermann – based on a text by Sturm and Drang poet Jakob Michael Reinhold Lenz – is the composer’s only completed opera.

This widely praised production which was the highlight of the Salzburg Festival in 2012 made full use of the width of the Salzburger Felsenreitschule to give room to the enormous dimensions of Zimmermann’s monumental opera, featuring a massive ensemble of 170 musicians including the Wiener Philharmoniker and led by German conductor Ingo Metzmacher.

The Latvian Alvis Hermanis directed the rarely staged and tragic story of the downfall of the middle-class girl Marie in an expressive representation and achieves to realize Zimmerman’s desired simultaneity.

The top-flight cast consisting of 50 soloists with Alfred Muff as Wesner and Laura Aikin as Marie received rave reviews from critics for their vocal and dramatic performances.

“Ingo Metzmacher conducts with an affection for the score that is palpable,

and the Vienna Philharmonic responds magnificently.” The New York Times

[Aikin] accomplishes the superhuman feat of actually *singing* Marie's music, a voice-killer if ever there was one...[she is] convincing as the petulant woman-child of Act 1, and the character's degradation as she proceeds through life is unerringly depicted....The sound engineers and video director have done a miraculous job.