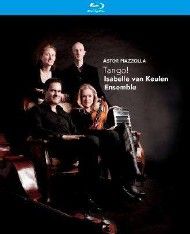 The Blu-ray version of the release ‘Tango!’ by the Isabelle van Keulen Ensemble (CC72610) features a video of the studio performance of several of the Argentinean composer Astor Piazzolla’s most popular pieces, including Verano Porteno, Oblivion, and Libertango. Accompanied by a special documentary, ‘Music from the Heart’, which presents interviews with ensemble members and behind-the-scenes footage of the studio recording process. The Blu-ray package also contains a CD of the recording.