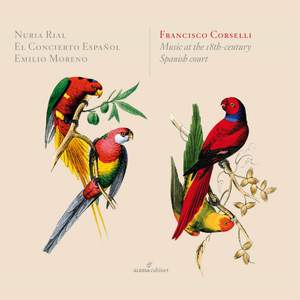 The first disc from El Concierto Español, the orchestra founded by the violinist Emilio Moreno (a founding member of Frans Brüggen’s Orchestra of the Eighteenth Century and a great champion of Spanish music) was dedicated to one of the most important composers of the 18th century in Spain, Francisco Corselli. Of Italian origin, Corselli spent a considerable part of his career working for the Spanish court, to which he brought the opera seria which was enjoying so much success elsewhere in Europe at the time. Lively orchestral passages and colourful opera arias alternate here with deeply-felt Holy Week lamentations in a recording from 2002, which as the vocal soloist also involved the great Catalan soprano Nuria Rial, who once again demonstrates her talent for Spanish music.

[Rial] matches the orchestra perfectly, and the balance between voice and instruments is very good. El Concierto Español delivers convincing interpretations of the orchestral scores; the wind players are especially admirable...For those who have a special interest in Spanish music this disc is not to be missed.