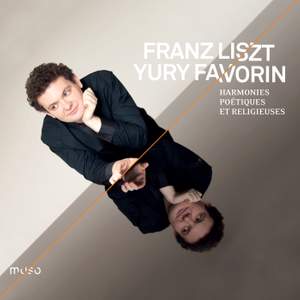 This is big-boned Liszt-playing, tough to interpret and admirably free from sentiment. There's no attempt at self-consciously flashy virtuosity. Funérailles is wonderfully stark and angry, while... — The Guardian, 4th July 2013, 4 out of 5 stars More…

This cycle notably includes two of Liszt’s greatest masterpieces for the piano: the famous 'Bénédiction de Dieu dans la solitude', serene, warm, contemplative, recalling in many places his Sonata, and 'Funérailles' with its almost unbearable emotion. Yet it also includes less frequently played pieces such as the dark meditation that is 'Pensée des morts', the dreamy 'Cantique d’amour' and others based on rarely heard choral compositions of Liszt. A major album in the piano repertory, 'Harmonies poétiques et religieuses' is one of the most accomplished and individual of Franz Liszt’s works.

A revelation of the Queen Elisabeth Competition for piano, Yury Favorin is the ideal performer for this rarely recorded repertory.. In this, his first disc, this young Russian, who was unanimously praised by the press in 2010 (“undeniably one of the most powerful musicians, from all points of view, of the session” – La Libre), is at the dawn of a great career that has already taken him to many prestigious platforms, including that of La Roque d’Anthéron where he was a triumphal last minute replacement for Aldo Ciccolini.

This is big-boned Liszt-playing, tough to interpret and admirably free from sentiment. There's no attempt at self-consciously flashy virtuosity. Funérailles is wonderfully stark and angry, while Bénédiction de Dieu dans la Solitude...is all supercharged rapture.