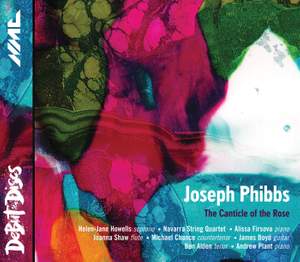 Joseph Phibbs: The Canticle of The Rose and other works

The relatively spartan textures of these pieces are more convincing than some of Phibbs's writing for larger ensembles. These works draw you in with a well-judged pacing of their sometimes frenetic... — BBC Music Magazine, September 2013, More…

Phibbs: 2 Songs from Shades of Night

Phibbs: The Canticle of The Rose

No. 3. Through gilded trellises

No. 7. The Canticle of the Rose

Phibbs: From Shore to Shore

No. 6. I dreamed that we were plagued by glassy Seas

Joseph Phibbs studied at The Purcell School, King's College London, and Cornell University, and his teachers have included Param Vir, Harrison Birtwistle and Steven Stucky. His works have been performed by leading ensembles including the London Sinfonietta, Britten Sinfonia, BBC Symphony Orchestra, London Symphony Orchestra, and National Symphony Orchestra (Washington). Since 2003 Phibbs has combined his composing career with the editing and promoting of Britten's music, and he is a director of the Britten Estate. He was appointed to teach composition at Wells Cathedral School in 2008 and is currently a visiting member of staff at The Purcell School and King's College London.The Canticle of the Rose, the centrepiece of this recording, sets a series of poems by Edith Sitwell for soprano and string quartet (including one which also appeared in Walton's Facade) ranging from the foreboding (We are the darkness) to the frivolous (Through gilded trellises). It is one of a series for voice with string quartet commissioned by Sir Nicholas Goodison. From Shore to Shore combines the countertenor voice of Michael Chance with guitar, and was commissioned by guitarist James Boyd with funding from the Arts Council England’s National Lottery scheme to broaden the contemporary repertoire for voice and guitar. Premiered at Aldeburgh in 2012, it sets a series of old and new poems on the subject of the sea. Contrasting with these vocal works are Flex - a vivid work for piano, flute, viola and cello - and the short string quartet Agea, dedicated to George Vass of Presteigne Festival.

The relatively spartan textures of these pieces are more convincing than some of Phibbs's writing for larger ensembles. These works draw you in with a well-judged pacing of their sometimes frenetic activity and mesmerising stillness.

Phibbs’s sheer accomplishment as a composer is unmistakeable here. Every idea is telling, every phrase beautiful. The sensibility is striking, too — rather literary, English, above all Britten-ish.