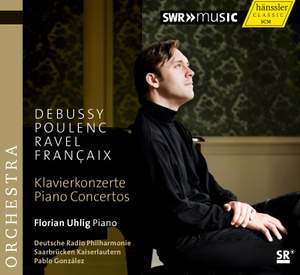 A great program featuring the largely neglected piano concertos from some famous composers active in France between 1890 and 1951. Debussy's "Fantaisie" was created in a period of change, exploring how the piano could become a voice in the orchestra.

After an altercation with the work NOT being played at its scheduled 1890 premiere, the Fantasie had to wait until after Debussy's death for its first performance and is seldom heard in the concert hall today.

The contrast with the late romantic Debussy work, Ravel is represented with the bright, humorous G Major Concerto. Poulenc's Piano Concerto is a jewel of sounds and colors, yet still stands in the shadow of his Concerto for Two Pianos. Finally, there is Jean Françaix’s Concertino, composed for a short, witty ten-minute film. Charm and wit, and all the corresponding range of moods are at Florian Uhlig’s command; the result is an entertaining and musically ravishing CD.

Debussy's unjustly-dismissed Fantasie and Francaix's pithy Concertino are the highlights of this programme, superbly interpreted by Florian Uhlig.

What an enticing programme this is...Uhlig proves a compelling advocate and the winds of the accompanying orchestra seem to gain in confidence as the work progresses...The über-compact Françaix Concertino is perhaps the highlight here, Uhlig and the orchestra vibrantly capturing the work's myriad moods, culminating in a rip-roaring finale.