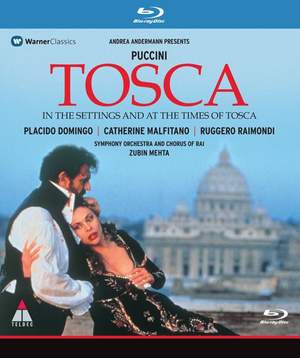 Conceived and Produced by ANDREA ANDERMANN

Directed for video by BRIAN LARGE

Recorded live in July 1992 - REMASTERED IN HIGH DEFINITION FROM THE ORIGINAL MASTER TAPE.

Contemporary Rome is the setting for this unique and highly innovative version of Puccini’s Tosca, performed in the Roman locations – and at the same times of day – as Puccini had written into his score. Thus the action opens in the beautiful 16th-century church of Sant’Andrea della Valle at noon, where Cavaradossi (Domingo) meets the fugitive Angelotti, moves to the Farnese Palace that evening where Tosca (Catherine Malfitano) dramatically makes a pact with the lustful Scarpia (Ruggero Raimondi), and finally to the battlements of the Castel Sant’Angelo at dawn the following day where the final drama is played out.