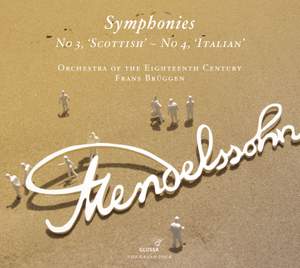 My instant reaction on first sampling the opening track was that this orchestra makes such a marvellous sound… The pizzicato passages were a particular joy. The phrasing is springy and always... — Early Music Review, August 2013 More…

Witnessing Frans Brüggen in any form of music-making is always a satisfying experience (the pleasure is doubly so this month with Glossa re-issuing the 1993 Sour Cream sessions featuring Brüggen as recorder player), so the opportunity to hear his interpretations of Mendelssohn’s Italian and Scottish Symphonies with his Orchestra of the Eighteenth Century is indeed an enticing one. Conductor and orchestra are both strongly in harmony with the evolving nature of the Romantic spirit of the 19th century; recent Glossa releases from them have included the much-praised Beethoven Symphonies and the Chopin Piano Concertos sets.

Here, Felix Mendelssohn is a composer who has long fascinated Brüggen – Glossa’s Cabinet series contains his 1997 recording of 'A Midsummer Night’s Dream' – and on this new recording he marvellously captures the emotional torrents experienced by Mendelssohn when reflecting on his own Grand Tour, which took in both the blazing sun of Rome and also the mists of the Scottish Highlands.

Opting to perform the original 1833 version of the Italian Symphony (as at its first performance in London), Brüggen sets out to paint a stronger contrast with the later completed Symphony No 3, brilliantly reflecting the composer’s wildly fluctuating moods at the time; a view of Mendelssohn eloquently covered by Roeland Hazendonk in his accompanying essay.

These new readings from Frans Brüggen – taken, as ever, from live performances, on Glossa's Grand Tour series, here from Utrecht in The Netherlands – are rounded off with a moving orchestral transcription of music by a composer as close to Brüggen’s heart as he was to Mendelssohn’s: the closing chorale of Bach’s Cantata No 107, 'Was willst du dich betrüben'.

My instant reaction on first sampling the opening track was that this orchestra makes such a marvellous sound… The pizzicato passages were a particular joy. The phrasing is springy and always driving forward and above all everyone sounds really happy to be playing the music. The perfect CD for the end of a difficult day

The [Scottish] Symphony's wind-dominated opening finds Bruggen taking Mendelssohn's cue for a show of clouds, where his period instruments suggest the texture of seasoned wood. This is a broad, thoughtfully pondered account...but if you view the Italian as sunny and invigorating, definitely sample before purchase.

Brüggen is now an old-looking 78, but his musical energy is undiminished in these fine re-recordings..With his period band, he brings these big Mendelssohn pieces closer to the airy, transparent sound world of the Midsummer Night’s Dream music