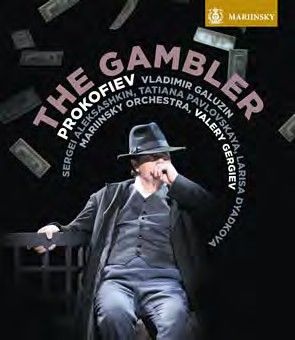 Gergiev conducts with exemplary clarity but not the requisite volatility — BBC Music Magazine, October 2013, 3 out of 5 stars More…

The Mariinsky label releases its second opera DVD & Blu-ray, Prokofiev’s 'The Gambler'. Filmed in the historic Mariinsky Theatre in 2010, it stars celebrated Russian tenor Vladimir Galuzin and bass Sergei Aleksashkin, and is conducted by Valery Gergiev. It is of fundamental significance that under Gergiev’s baton the Mariinsky Orchestra and opera company have performed all of Prokofiev’s symphonies, concerti and operas on numerous occasions.

Georgian director Temur Chkheidze, who also presented the Mariinsky’s last production in 1996 and directed the opera with critical success at the Metropolitan Opera in 2001, gives a fresh look to Prokofiev’s first opera.

Set in the fictional town of Roulettenburg in the mid-19th Century, 'The Gambler' is a four-act opera that displays the dramatic highs and lows involved in the game of chance. At the centre of the story is Alexei, who is in love with The General’s step-daughter, Pauline. All of the characters fall victim to the temptation of gambling, each one consumed by the obsession and greed that drives them.

Vladimir Galuzin, who plays the role of Alexei, is indisputably one of the world’s leading dramatic tenors, known for his unrivaled stentorious voice and extremely vivid characterisations of some of the most demanding roles. A Mariinsky soloist since 1990, he is much in demand internationally, performing regularly during the last two decades as a guest of most of the world’s most prominent opera houses, concert halls and festivals. The role of The General is played by Russian bass Sergei Aleksashkin. Three-time recipient of the Golden Sofit, St Petersburg’s most prestigious theatre prize, Sergei has been a Mariinsky Theatre soloist since 1989, singing title roles in Mussorgsky’s 'Boris Godunov' and Glinka’s 'Ruslan and Lyudmila'.

Recorded at the Mariinsky Theatre, June 2010

Gergiev conducts with exemplary clarity but not the requisite volatility

The stage production by Temur Chkheidze is simple and straightforward...The cast is a decent one overall, with Tatiana Pavlovskaya making a glamorous Polina, Sergei Aleksashkin an old bumbler as the General, and Nikolai Gassiev and Alexander Gergalov both nicely suave as the Marquis and Mr Astley

The Mariinsky players are at their most impressive, and Valery Gergiev sustains Prokofiev’s driving energy from start to finish with theatrical force that I had not expected from this work. Both the sound and video direction cannot be seriously faulted.

Musically, this performance is very strong. Gergiev is on his home territory here, and he has the orchestra and singers eating out of his hand...The finest vocal actor in the cast is the General of Sergei Aleksashkin who carefully treads the line between the buffoon and the victim.

Leading from the pit, Valery Gergiev brings to Prokoviev’s score everything that this music calls for: grit, propulsion, a finely-judged sense of musical weight (a quantity that here shifts constantly and needs changing calibrations in performance), a wondrous sense of colour, and exquisite textural clarity.