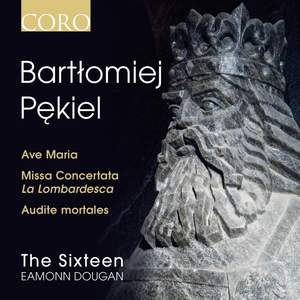 The choral sound is well-focused in the men-only Ave Maria and the mini-duets for sopranos (Charlotte Mobbs and Alice Gribbin) are stylish. Apart from the edgy haute-conte (high tenor) solos... — BBC Music Magazine, September 2013, 4 out of 5 stars More…

Associate Conductor of The Sixteen, Eamonn Dougan, makes his full conducting debut on CORO in the first of an exciting new series exploring some of Poland’s greatest choral composers.

Bartłomiej Pękiel was one of the most eminent Polish composers of choral music of the 17th century. He served at the court in Warsaw from around 1633 and was assistant to Marco Scacchi at the Chapel Royal in Warsaw before becoming Kapellmeister himself from 1645-1655 - the first non-Italian to hold the post. He then moved to Wawel Cathedral in Krakow where he wrote for the Rorantist vocal ensemble.

Just 29 of his compositions survive today and on this new album by The Sixteen under the direction of Associate Conductor, Eamonn Dougan, we present 10 of his works for choir and orchestra including the Missa Concertata La Lombardesca resplendent with double choir, violins and sackbuts and the extraordinary and dramatic Audite mortales.

In this recording dedicated solely to his works, Pękiel shows himself to be a skilled craftsman, mastering the techniques taught by the Italian maestri, but also imbuing his works with his own particular harmonic colour in all the varied styles in which he writes.

The choral sound is well-focused in the men-only Ave Maria and the mini-duets for sopranos (Charlotte Mobbs and Alice Gribbin) are stylish. Apart from the edgy haute-conte (high tenor) solos in the Carissimi-influenced rhetoric of Audite mortals, it's a delightful performance.

This craftsman's masterful music is presented here with an assured charisma by the mighty Sixteen...[Dougan] draws typically golden performances from his vocalists and mixed instrumental ensemble...Sit back and relish this treasure-trove which has clearly been prepared with passion.

The Sixteen, here numbering 17 singers plus a 13-member instrumental ensemble, turn in polished performances, clearly enjoying the many opportunities for the solo work with which Pekiel provides them.

The richness and sheer ambition of the latter pieces, such as the Missa Concertata La Lombardesca, testify to a talent worthy of standing alongside Monteverdi and Cavalli.

The sound world, very loosely, brings to mind Monteverdi. The exciting dissonances and strange harmonic colours set Pękiel in a category of his own.

The first native to break the Italian monopoly on top musical positions in 17th-century Poland, Pekiel wrote attractive (and harmonically daring) music in the style of Monteverdi and Buxtehude.

While the four masses featured on this disc are often distinctive in expressive variety and nuance Italian polyphony, the musical styles of Monteverdi and Cavalli are never far away...The Sixteen, under Eamonn Dougan’s direction, is on characteristically strong form providing persuasive advocacy for this hitherto almost forgotten music.