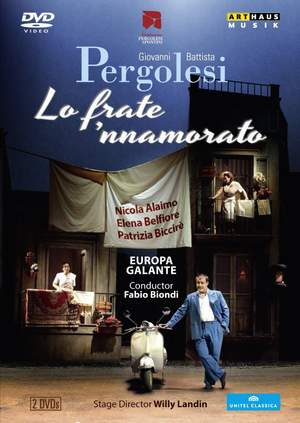 The production...brilliantly updates the work to the 1950s. Its whole atmosphere is redolent of that great era in Italian cinema...The fast-paced comedy is perfectly placed - and ideally paced...Patrizia... — International Record Review, June 2013 More…

Pergolesi’s comic opera Lo frate ’nnamorato (The Brother in Love) from 1732 was his ticket to the Royal Chapel in Naples. Its huge success was due to the beautiful score, showing Pergolesi’s talent for opera compositions, and the exquisite Libretto by Gennarantonio Federico. Lo frate ‘nnamorato especially owes its wit and exuberance to the comic resources of improvisational theatre, which is refl ected in the narrative structure and relationships between the dramatis personae. Love triangles, marriage plans that come to nothing, intrigues and more lead the opera along to the unsuspected outcome.

The 2011 Jesi production, set in the 1950s, features an outstanding cast of singers that further present first-class acting skills that drive a line between quintessence and parody, inventive genius and a sense of tradition, caricature and insight into the roles and characters. Nicola Alaimo, Elena Belfiore, Patrizia Biccirè and Jurgita Adamonytė – to name but a few – carry this wonderful production, realized by the young Argentine director Willy Landin.

Fabio Biondi began his career as a Wunderkind Violinist at the age of twelve. In 1990 he founded his fabulous ensemble Europa Galante, which quickly became the most internationally renowned and awarded Italian ensemble of baroque music.

The production...brilliantly updates the work to the 1950s. Its whole atmosphere is redolent of that great era in Italian cinema...The fast-paced comedy is perfectly placed - and ideally paced...Patrizia Biccire is utterly on song - soulful, with a full, rounded tone...The procession of good tunes, hints of folk music, and really wittily crafted ensembles is irresistable

The singing and playing in this performance are quite outstanding...Under Fabio Biondi this score bubbles and shines very brightly indeed. The singing and acting of Laura Cherici as the maid Vannella is but one high point in a set of beautifully observed performances.