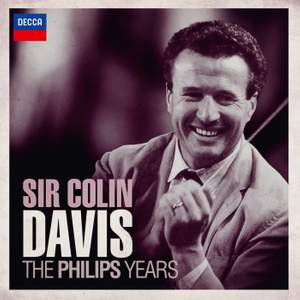 1. Mars, the Bringer of War

2. Venus, the Bringer of Peace

4. Jupiter, the Bringer of Jollity

5. Saturn, the Bringer of Old Age

"You Can Pick Roses"

"If You Think We're Waxworks, You Ought To Play"

"O, You Stare In Horror"

"You Must Both Hold With Me"

"And What Are You, Mangus?"

"I Am No More Afraid"

Appearance of the Firebird pursued by Ivan Tsarevich

Supplication of the Firebird

Game of the Princesses with the golden apples

Round dance of the Princesses

Dance of Kashchei's retinue under the spell of the Firebird

Infernal dance of all Kashchei's subject's

Lullaby of the Firebird

Originally planned as an 85th birthday tribute, this set documents over 3 decades of exceptional artistry by the Sir Colin Davis, one of the musical pillars of the Philips label (now part of Decca Classics), who died Sunday 14th April 2013. He was a musician of incomparable integrity and class.

After signing to Philips exclusively in the mid-1960s, over more than three decades he then produced work for the label of the highest quality and range:-

• plus top-ranking Sibelius, Beethoven, Stravinsky, Dvorak and Britten, and much else.

An extraordinary number of his recordings have achieved legendary status and are enduring staples of the catalogue. This set balances all his most important musical spheres as well as many of his most important artistic relationships with soloists, orchestras and opera houses around the world.

The booklet notes are in English, French and German with an excellent appreciation of his work for Philips by Jeremy Hayes.