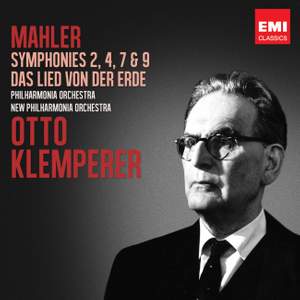 For much of his life, Otto Klemperer carried a note written by his hero Gustav Mahler, in which the composer praised the young Klemperer as ‘an outstanding musician […] predestined for the career of a conductor.’ Klemperer’s interpretations of Mahler’s work, famous for their ‘big outlines’ and ‘rock-like rhythms’ (Musical Times) became world-famous. This collection showcases Klemperer’s Mahler, including works such as the Ninth Symphony and Das Lied von der Erde.

Otto Klemperer was born on 14th May 1885 in Breslau, Silesia (now Wroclaw, Poland) and died on 6th July 1973 in Zurich hence 2013 marks 40 years since his passing. He had had a remarkable career as a young man but it was at the age of 70 that he started a series of recordings that would not only establish him as an internationally renowned conductor but provide EMI with a catalogue of recordings that became and remain touchstones.

Gustav Mahler’s influence on his successors was enormous and numerous composers – Zemlinsky, Schönberg, Berg, Webern, Shostakovitch, Britten and Copland are just a few to acknowledge their debt. His influence also spread to the world of popular music. Paul McCartney wrote “I have always adored Mahler, and Mahler was a major influence on the music of The Beatles. John and me used to sit and do the Kindertotenlieder and Wunderhorn for hours, we’d take turns singing and playing the piano. We thought Mahler was great.”

His income came principally from conducting of which he was a fine exponent; Otto Klemperer regarded him as his the best he ever saw and although eternally grateful that he recorded the works contained in this collection it is sad that he never committed so many more to disc. Whilst all of them demand attention it is those of the “Resurrection” Symphony (No. 2), Symphony No. 9 and Das Lied von der Erde in particular that have always been regarded as of the highest rank and in their latest remasterings literally defy their age.