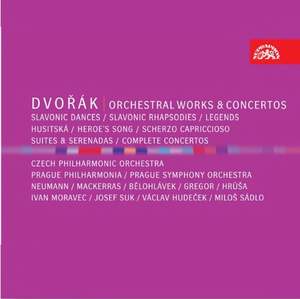 Dvořák: Polonaise in E flat major for orchestra, B100

Dvořák: Cello Concerto in A major, B10

Collectors and admirers of Dvořák’s music bearing the hallmark of the Czech performance tradition can now add another comprehensive album to put alongside the previous complete Supraphon CDs mapping his chamber (SU38152, SU39212), piano (SU40182) and symphonic works (SU40902). The acclaimed recording of the symphonies, conducted by Václav Neumann, is now followed by Supraphon’s 8-CD box set featuring Dvořák’s orchestral pieces and concertos. In addition to the celebrated Slavonic Dances, it contains a number of rarely recorded symphonic works (the Hussite Overture, My Home, A Hero’s Song), as well as splendid compositions for chamber and string orchestras. Besides recordings made under the baton of Neumann, it provides scope to other great Dvořák conductors – Mackerras, Bělohlávek and the rising star Jakub Hrůša. The set of orchestral works is rounded off by recordings of concertos, ranging from the virtually unknown Cello Concerto in A major, written by the young Dvořák, to the most frequently performed, the Cello Concerto in B minor. Supraphon has again carefully put together top-quality and time-honoured recordings of works performed by world-renowned soloists.