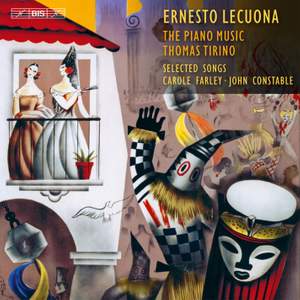 Cuba and America (March and Two-Step)

I. No hables mas!

Como presiento (The feeling I have)

Lecuona: Alla en la sierra (There in the mountains)

Cordoba: Alla en la sierra (There in the mountains)

Tu no tienes corazon (You have no heart)

Dame de tus rosas (Give me of your roses)

Dame el amor (Give me your love)

Lecuona: Que risa me da (Oh what a laugh)

Carnival in Costa Rica: En una noche asi (On a night like this)

Lecuona: Devuelveme el corazon (Give me back my heart)

Lecuona: Me has dejado (You have left me)

No me enganaras (You won't deceive me)

Lecuona: No me mires ni me hables (Don't look at me or speak to me)

Mi amor fue una flor (My love was a flower)

Released in 1995 – the centenary of Ernesto Lecuona’s birth – the first instalment of Thomas Tirino’s pioneering survey of the composer’s piano music caused a sensation.

Fifty years after the death of Lecuona – often described as ‘the Cuban Gershwin’ – this box set provides a timely opportunity for a new generation to discover the qualities that made him a legend in his own time.