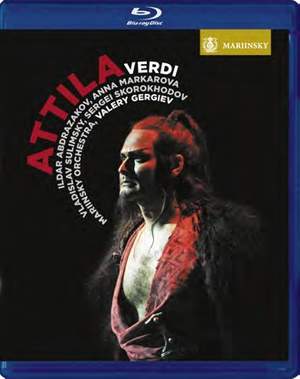 The Mariinsky label is delighted to release the first of four operas on DVD in 2013 with Verdi’s 'Attila'. Released in celebration of Verdi’s anniversary year, acclaimed Russian bass Ildar Abdrazakov stars in the title role, in this the premiere of Arturo Gama’s production. He is ably supported by soprano, Anna Markarova in the role Odabella; baritone, Vladislav Sulimsky in the role of Ezio and tenor, Sergei Skorokhodov. The bluray release, filmed in the Mariinsky Opera House will feature a stunning picture gallery of scenes from the performance in addition to the three-act opera.

As is the case with many of Verdi’s operas, his ninth opera, 'Attila' is imbued with the spirit of Risorgimento, the national liberation movement of the Italian people against foreign rule and for the unification of trampled Italy. The plot, which tells of the struggle of Aquileia, one of the last remaining strongholds of once eternal Rome, against the barbarian hordes of Attila, King of the Huns, received an enthusiastic reception from the audience present at the premiere at the Teatro la Fenice in Venice, and yet is rarely performed in today’s opera houses. Since the premiere in 2010, the Mariinsky has revived Arturo Gama’s production each season, most recently in January 2013.

A two-time Grammy Award winner for his Verdi readings, Ildar Abdrazakov has quickly established himself as one of opera’s most sought-after basses. Since making his La Scala debut in 2001 at only 25, the Russian singer has become a mainstay at leading houses worldwide. His powerful, yet refined voice coupled with his compelling stage presence have prompted critics to describe him as a “sensational bass … who has just about everything – imposing sound, beautiful legato, oodles of finesse”, The Independent.

Arturo Gama has been the Stage Director of the opera company at the Mecklenburgisches Staatstheater Schwerin in Germany since 2005. He has staged a large number of productions, including 'Bluebeard’s Castle', 'Tosca', 'Die Zauberflöte' and 'Roméo et Juliette'; his most recent work was Richard Wagner’s 'Tannhaüser'. He originates from Mexico City and at the end of his dance career with the National Dance Company of Mexico, the Komische Oper Berlin offered him the position of Assistant Director, working with well-known directors including Harry Kupfer, Andreas Homoki, Peter Konwitschny, David Alden, Hans Neuenfels and Willy Decker.