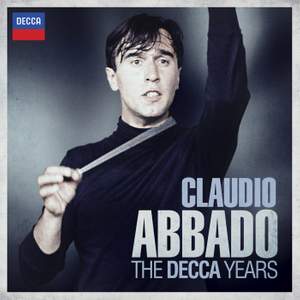 2. Dance of the Wives

3. The Buffoons kill their Wives

6. Dance of the Buffoons' Daughters

8. In the Merchant's Bedroom

9. The Young Wife becomes a Goat

11. Quarrel between the Buffoon and the Merchant

1. The Montagues and the Capulets

6. Dance of the Maids from the Antilles

On the cusp of his eightieth birthday, Abbado brings the chamber-like qualities of his Mozart recordings to the music of Schumann in performances which are shot through with vivacious sparkle and evident love for the music.

Between February 1966 and January 1969 he made a series of 9 LP recordings for Decca. This small legacy already gives a clear indication of Abbado’s musical sympathies and the range of repertory he was conducting in the concert hall and on record, and which would continue to characterize his future career. This set brings together Abbado’s complete Decca studio recordings for the first time.