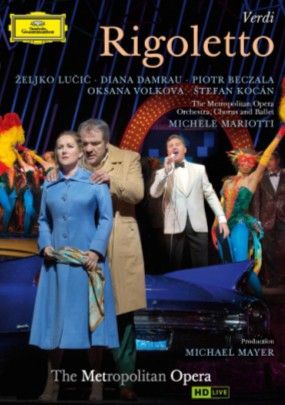 This DVD and Blu-ray release appears in the Verdi year 2013, as music lovers around the world celebrate the bicentenary of the birth of Italy’s beloved composer.

Director Michael Mayer has placed his new production of Verdi’s towering tragedy in Las Vegas in 1960 – an ideal setting for this eternal conflict of depravity and innocence.

Željko Lučić as Rigoletto and Diana Damrau as Gilda

Piotr Beczala as the Duke