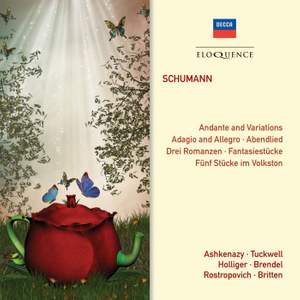 Schumann played by such luminaries as Ashkenazy, Holliger and Brendel, culminating in a spellbinding account by Rostropovich and Britten of the five cello and piano pieces Op. 102. — BBC Music Magazine, August 2013, 5 out of 5 stars

Schumann: Adagio and Allegro in A flat, Op. 70

Late in the 1840s, Schumann entered a chamber music phase. It was, it is said, motivated partly by financial reasons – creating a body of chamber works that could be played by talented amateurs in their own homes. Many of the works on this disc date from 1849. Significantly, for collectors, one of these – the Andante and Variations – receives its first release on CD and marks Vladimir Ashkenazy’s first recording of chamber music for Decca. The same sessions also included duo piano recordings with Malcolm Frager, from which the Study in Canon Form emanates. Other notable duo collaborations on this disc include Rostropovich and Britten (Fünf Stücke im Volkston), Holliger and Brendel (Drei Romanzen, Abendlied) and Ashkenazy with Tuckwell in the 1974 (Adagio and Allegro) and with Franklin Cohen in 1990 (Fantasiestücke).

Schumann played by such luminaries as Ashkenazy, Holliger and Brendel, culminating in a spellbinding account by Rostropovich and Britten of the five cello and piano pieces Op. 102.