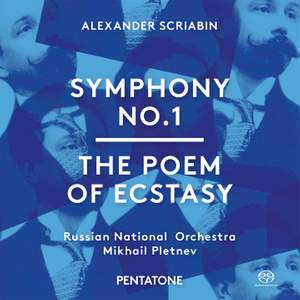 Scriabin: Symphony No. 1 & The Poem of Ecstasy

there is a good deal which is captivating in Mikhail Pletnev's excellent performance: in the thistledown Scherzo, the Russian National Orchestra demonstates polished and tight ensemble playing... — BBC Music Magazine, November 2015 More…

In 1899, Scriabin began writing his most ambitious composition to date: the First Symphony. The work still reflects the influence of the traditional fourmovement formal scheme. The first movement, in sonata form (Allegro dramatico), is followed by a slow movement (Lento), a scherzo (Vivace) and an Allegro, again in sonata form. But Scriabin also framed the symphony with an introductory movement in a slow tempo and a monumental choral finale with a text of his own composition, and it is this movement that can be said to occupy the work’s interpretational centre of gravity. The First Symphony documents a search for salvation and unification, both of which can only be found in art: “May your mighty and free spirit reign all-powerfully on earth; and humanity, lifted up by you, perform a noble deed. Come all nations of the world and let us sing praises to art!”

Le Poème de l’extase debuted in New York on 10 December 1908, after a performance in Russia had to be cancelled due to the difficulty of the score. However, when the Russian première finally did take place, on 1 February 1909, it wound up being a true spectacle. The then young composition student, Sergei Prokofiev wrote, “Myaskovsky and I sat next to each other and consumed the Poème de l’extase with the greatest of interest, although, at different moments during the performance, we were entirely confused by the newness of the music. We had expected something surpassing the divine Poème, which we both knew well and loved. But both the harmonic and thematic material of the work, as well as its contrapuntal voice-leading, resembled nothing we had ever heard before.” Conductor Mikhail Pletnev surpasses the extreme with his Scriabin interpretation and draws what he needs from the Russian National Orchestra ⎯ the Moscow-based ensemble he founded in 1990. This results in a near-perfect performance of both works. Blessed by the orchestra’s warm, vibrant playing, this CD is a real pleasure for everyone who adores the esoteric and unorthodox work of Scriabin. It is definitely THE Symphony No. 1 and Poem of Ecstasy to own: an ideal performance with sonic audio quality to match.

there is a good deal which is captivating in Mikhail Pletnev's excellent performance: in the thistledown Scherzo, the Russian National Orchestra demonstates polished and tight ensemble playing for the lively main tempo…[in Poem of Ecstasy] Pletnev's relatively unhurried performance makes the two climaxes all the more powerful, Vladislav Lavrik's trumpet adding a certain masochistic edge with its cries of ecstatic pain.

[Pletnev] has an innate feel for the symphony's and The Poem of Ecstasy's shape and colour, by no means afraid to let rip when full instrumental forces are in play but also well aware that Scriabin could use his palette of timbres with telling discretion…these are performances in which you sense that the RNO and all the artists involved have this music coursing through their very veins.

There’s a sense that Scriabin’s Symphony No 1 picks up where Wagner left off, and Mikhail Pletnev approaches this sprawling work with both an ear for a yearning phrase and an eye for huge musical architecture...Pletnev’s is a very persuasive take on a repertoire most conductors seem shy of.

in musical phrasing, orchestration and in all manner of melodic and harmonic detail [the First] is a work that clearly points to the Skryabin of the future. Pletnev recognises this factor here in his malleable control of tempo: the music flows and surges with spontaneity and with clear definition of climax and repose...an outstanding tribute to Skryabin in his centenary year.