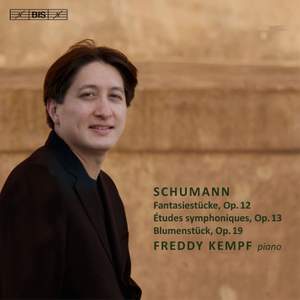 There is real beauty to Kempf's sound, especially in the lyrical moments of the Fantasiestucke, and careful, intelligent voicing of the very contrapuntal Etudes Symphoniques...there's also rewarding... — BBC Music Magazine, August 2013, 4 out of 5 stars More…

With a flourishing international concert career and an acclaimed discography, Freddy Kempf has become firmly established among the top pianists of today. His very first disc, at the age of 22, was a Schumann recital that made reviewers around the world sit up and take notice.

Kempf now returns to Schumann, with these three solo piano works. The Études symphoniques is one of Schumann’s most imposing piano works and is played here in its 1852 version, with the additional five variations (later published by Brahms) and the third and ninth études from the 1837 edition. This really gives the listener an opportunity to hear this work in all its glory.

There is real beauty to Kempf's sound, especially in the lyrical moments of the Fantasiestucke, and careful, intelligent voicing of the very contrapuntal Etudes Symphoniques...there's also rewarding flair which never seems to exist for its own sake, but pursues a larger total impression.

Right from the opening notes of Freddy Kempf's new Schumann disc, you grasp what his approach will be, for his 'Des Abends' that launches Op. 12 is striking in its dreaminess...The most successful thing here is the Blumenstuck, which is charmingly played, though not a match for Horowitz.

In the Études and the Fantasiestücke his playing veers between ravishing, delicately coloured poetry and an almost dismissive fierceness, so that the promise of what could be a very fine Schumann set is repeatedly snatched away. It's an exasperating, rather perplexing disc.