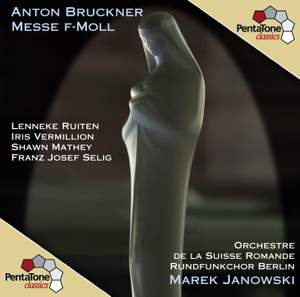 despite the heaviness of the scoring and big block textures of much of the choral writing, Janowski achieves a lightness and transparency throughout...The greatest plaudit here goes to the bass,... — Gramophone Magazine, Awards Issue 2013 More…

In 2008 PentaTone started the recording of a complete Bruckner Symphonies cycle with the Orchestre de la Suisse Romande conducted by Marek Janowski. All of them have now been recorded and most of them have been releases (with the exception of Symphonies Nrs. 2 and 4 which will be released later this year).

The cycle received a lot of critical acclaim. Gramophone reviewer Edward Seckerson mentioned “There’s more than a touch of the great Euchen Jochum in Janowski’s approach”. The current release is complementary to the Symphonies cycle and features the renowned Rundfunkchor Berlin and an excellent cast of soloists. Recorded in superior surround sound in the fine acoustics of Victoria Hall Geneva, makes this recording a must buy for Bruckner aficionados. There is currently no version on SA-CD available in the market.

despite the heaviness of the scoring and big block textures of much of the choral writing, Janowski achieves a lightness and transparency throughout...The greatest plaudit here goes to the bass, Franz Josef Selig, who is warmly resonant. This flawless performance is of the highest quality.

The choir does all he asks of it and is sufficiently strong in numbers to supply great strength in the louder passages...With Janowski demanding nothing excessive of the singers, the result is a suitable blend of the vigorous and the reverential.

In a judicious paced account Janowski confidently obtains both dramatic and deeply felt playing yet achieves a fresh and strong sense of spontaneity. The admirable team of soloists is well chosen...With a performance high on vitality and reverence Bruckner is well served by this impressive recording.