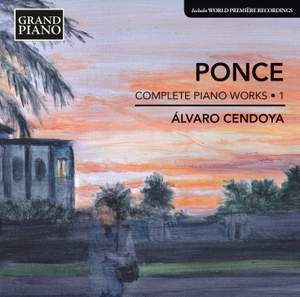 Though this opener is not a must-have, it augurs well on the whole for the rest of the series — MusicWeb International, 20th May 2013

I. Semplice, in tempo d'allegretto

Manuel Ponce was the founder of Mexican musical nationalism, often incorporating the melodies of harmonised folk–songs into his music. Widely travelled – he studied in Europe, at first in Bologna and then, between 1925 and 1933, as a pupil of Dukas in Paris – Ponce assimilated a wide range of styles and influences, including European– influenced Romanticism, indigenous idioms and a more advanced harmonic language.

This is the first of eight volumes devoted to Ponce’s complete piano music.

Though this opener is not a must-have, it augurs well on the whole for the rest of the series