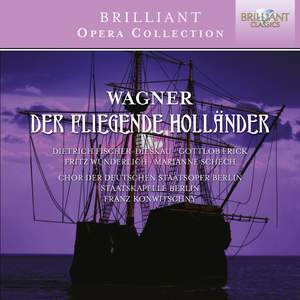 One of the greatest and most revolutionary composers of the nineteenth century, Richard Wagner transformed the realm of musical drama. Years before his towering successes of the Ring Cycle, Tristan und Isolde and Die Meistersinger von Nürnberg, he wrote the now lesser‐performed The Flying Dutchman, an opera that marks the beginning of Wagner’s mature works.

The opera – premiered in Dresden in 1843 – is based on Heinrich Heine’s telling of the legend in which the captain of a ghostly vessel, The Flying Dutchman, is doomed to roam the seas for all eternity until he wins the love of a woman. The fate of the Dutchman is said to have struck Wagner as a mirror image of his own disastrous fate in Paris; having expected the city to hail him as a genius, he was left bitterly disappointed. From the outset, the overture depicts the vast expanse of the rolling sea and hints at the despair that is to come, while weaving together other leitmotifs that will reoccur later in the work.

Other highlights include Senta’s heartfelt ballad from Act II, the Dutchman’s soliloquy ‘Die Frist ist um’ and the raucous shanty that is the Sailors’ Chorus. The role of the Dutchman is sung by legendary lyric baritone Dietrich Fischer‐ Dieskau, described by The Guardian as ‘the most influential singer of the 20th century’. Playing his love interest, Senta, is Marianne Schech, while Gottlob Frick takes the role of her father. The soloists are supported by the Chor der deutschen Staatsoper Berlin and the Staatskapelle Berlin, conducted by Franz Konwitschny.