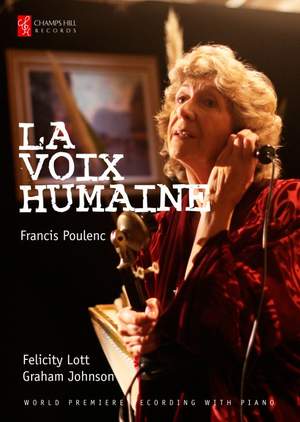 it is hard to think of two finer champions of Poulenc's music, and this set finally gives us a chance to see Lott's devastating interpretation...Johnson is responsive to every psychological eddy... — BBC Music Magazine, June 2013 More…

La Voix Humaine is Poulenc’s one-woman tour de force to a text by Cocteau. It is a work which Felicity Lott has made her own – she gave a spellbinding performance at the BBC Proms in 2003: "Felicity Lott’s in wonderful form" said The Daily Telegraph and Classicalsource.com wrote “Having made the role very much her own in recent years, Felicity Lott duly encompassed its range of emotional minutiae with an impressive command ... and impeccable French.”

This new HD filmed performance is the world-premiere recording with piano and is here in both DVD and Blu-ray format. It is the first time (since Francis Poulenc’s own performances, accompanying Denise Duval over 50 years ago), that permission has been given for La Voix Humaine to be recorded with piano accompaniment. Mme Rosine Seringe, the composer’s niece, has granted a special dispensation to Felicity Lott and Graham Johnson – as a token of decades of special friendship between the artists and the Poulenc Estate – for this work to be produced.

Champs Hill Records is delighted to celebrate its relationship with Felicity Lott with this unique recording, in the fiftieth anniversary year of the composer’s death. Other ‘Flott’ releases on the label include ‘Summertime’, ‘My Own Country’ and a recital disc of Strauss songs. La Voix Humaine, premiered at the Opera Comique in Paris in 1959, is based on Cocteau’s 1927 stage monologue and is the most nakedly emotional of all Poulenc’s works. It presents a woman on stage speaking on the telephone with her (invisible and inaudible) departing lover, who is leaving her to marry another woman. She is frequently interrupted by problems with the unreliable Paris phone system of the time (not unlike contemporary problems with mobile phone signals!).

The drama is communicated even more powerfully by Poulenc’s score, telling us about the unheard half of the conversation and making the character of ‘Elle’ more sympathetically, with genuine tenderness accompanying her desparate and manipulative attempts to keep her departing lover on the phone.

it is hard to think of two finer champions of Poulenc's music, and this set finally gives us a chance to see Lott's devastating interpretation...Johnson is responsive to every psychological eddy and it is simply and tastefully filmed...Just remember to allow some recovery time in solitude afterwards.

Lott and Johnson are a natural choice for this venture. Much of the opera calls for the saying of one thing while acting another...Lott brings this off with huge fluency in one small, attractively lit studio...The feeling, from Johnson's vivid, emotive accompaniment too, is very 'live'

Lott not only sings with a richness that belies her years but also acts with extraordinary intensity. Johnson is unseen throughout but his musical presence is strongly felt...for those collectors who already have a recording of the work as Poulenc wanted it to be heard, I can't imagine a better companion than this moving and intensely personal performance.

Lott's late-career revisitation of the score is if anything even more searing than the earlier audio recording.